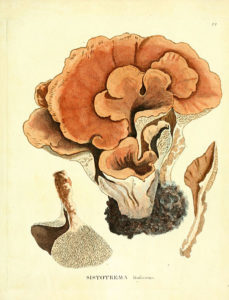 Lingzhi, also known as reishi, is a polypore fungus (also referred to as a bracket fungus) belonging to the genus Ganoderma. Its red-varnished, kidney-shaped cap and peripherally inserted stem gives it a distinct fan-like appearance. When fresh, the lingzhi is soft, cork-like, and flat. It lacks gills on its underside and depending on its age the underside may be white or brown. It can also grow in an ‘antler’ shape in poorly ventilated settings.

Ganoderma lucidum can be found on the hardwoods (especially oaks) of warmer regions of its native Asia, the South Pacific & the Southeastern USA. It is thought to be very difficult to find in the wild but given it’s reputation as a medicine it is widely cultivated in habitats where it is happy to grow. Cultivating it at home may require a dedicated space in which fungus of Ganoderma lucidum is mixed with wood pulp and kept in a warm and humid environment with shaded lighting. Some growers create huge walls of plastic grow bags containing Ganoderma spores, and time the tearing of the bags to expose the mushrooms to CO2 to produce the flat caps.

It is not to be found in Western Europe, but for those who live close to it, wild crafting requires great determination and also great care as it is so precious in the wild, so following the ‘take only what you need’ philosophy remains true. If harvesting cultivated mushrooms, one may be able to harvest 2 or 3 crops from one plant if it is well looked after. Some growers recommend finding the perfect balance of ventilation to encourage the ‘antler’ shape of growth in the mushroom, which can grow up to 3 feet in length before harvesting. Different companies sell grow kits and spores for home inoculation.
There are various ways of preparing Ganoderma, and one can find 1:3 tinctures, decocted tinctures and recently I had heard of a ‘russian extract’ which is 3:1. Double extracted methods are generally thought of as important as valuable immunomodulating polysaccharides will only be released from the durable chitin in the mushroom when it is simmered for quite a long time. The alcohol helps to extract the terpenes which are antioxidant and antiinflammatory.

The history of humans using Ganoderma lucidum is over 2000 years old. It’s local name in China is Lingzhi, translating to ‘The Plant of Immortality’. In TCM  it is closely affiliated with the heart and the brain, connecting the middle and upper cauldrons in preserving and improving memory & capacity for clear thinking, and also for treating constrictions of the heart qi. The goddess of healing Guanyin is sometimes depicted as holding a reishi mushroom, a real testament to its cultural reverence. The mushroom has long been touted as one that relaxes the heart and calms the nerves while encouraging a sustainable regeneration of qi.

Avoid use  with anyone who has a mushroom allergy. Note that some with very weak digestive function may have trouble digesting the B-Glucans in which case build the digestive fire and perhaps try again. In large doses it has been observed to cause diarrhea.

–  A decoction can also be used. Myconutri and other suppliers provide powders and capsules which may also be of benefit.